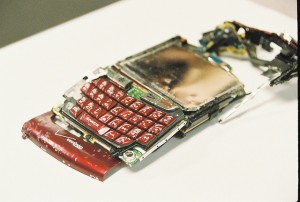 Research in Motion (RIM), renamed BlackBerry Ltd (BBRY), was founded in 1984 and was involved in several activities related to wireless communications. In the beginning of the century, the company introduced a pager that could push email through its proprietary BlackBerry enterprise server. In order to leverage the potential of its own server, RIM introduced its first mobile phone in 2000. Due to the push email and use of encryption technologies, the company was able to gain access to government contracts. The company quickly introduced more phones directed to the consumer market as well. RIM was able to capitalize on its orientation to internet services like email. Through the development of mobile phones with a qwerty form factor, the phones were applicable to both enterprise clients and youngsters addicted to SMS. For this last group of customers the company had a service called BlackBerry Messenger (BBM). This messaging product was a huge success since allowed BlackBerry users to send free unlimited messages. Summing up, RIM specialized in offering low power phones that allowed email access, through its own servers, which was a good edge over competition.

The problems started with the iPhone and the agreement Apple (AAPL) made with AT&T (T) to provide unlimited data packages. This enabled users to have a fully capable internet browser on the iPhone, something that Blackberry wasn’t prepared to fight. The company’s systems were much older and didn’t provide the same feel-good experience as the iPhone. On the same note, never before had carriers allowed the unlimited data package offer that Apple was providing. RIM’s management had never thought that was possible, so they weren’t prepared for the day that could turn into reality.

RIM’s management was so deeply immersed in doing business as usual that they never thought about exploring such a possibility. On the other hand, Apple being a complete newcomer to the marketplace was capable of thinking up out-of-the-box solutions which could revolutionize the whole industry. With this fast shift from low powered phones to high processing smartphones, RIM’s technology was no longer the best in the market and enterprise clients started to adopt other solutions, like the iPhone and Android OS phones.

From that point on, RIM was always behind the curve. The company’s efforts to catch up were proving unsuccessful. The management team was overhauled in the beginning of 2013, which was already a warning signal. During 2013 the revamped strategy was to update the BB operating system and bring new touch and qwerty phones to the marketplace. The company overestimated the demand for its new phones, which led to excess inventory and subsequent costly write-offs. Stock market quotation reached its peak around $230, in 2007, heavily beating the S&P 500. Presently, it trades at $10.70, or a loss of 95%.

The main lesson we have to retain is to be sure that the competitive advantages that a company is exhibiting are resilient or if a possible future event might be able to destroy them. Another interesting lesson comes from the fact that it seems that Blackberry lost the focus of its real business: delivering reliable and easy-to-use communication solutions. Along the way it seems that management started to think they were on the business of making cell phones. They turned their focus from the client to the product. This is a deadly mistake; it’s not a product that you sell, it is the client that you serve. To be a successful investor in the long term, one needs to comprehend the business of the companies in which he is investing. Additionally, he must be sure that the management also understands it, or else you might end up with a 95% loss.