Of all scenarios, why a recession?

In my market analysis, I tend to ponder extreme scenarios, even some unfathomable ones. It is useful to identify red flags that allow me to set up exit strategies. For example, I’ve played the Trump trade through exposure to US banks and manufacturing companies. However, I’ve played it while bearing in mind that Trump could be unable to materialize policies benefiting those companies. This last point has proven to be wise.

We didn’t have a recession since 2008, exception made to some negative isolated quarters. The recovery has been slow but steady. Several analysts have stated that with so many years without a recession, one must be due at any time.

I don’t agree with this view, after all economic developments are broadly indeterminable and bull markets don’t die of old age. Nevertheless, we must keep a recessive scenario on the table. Just in case.

Generalizing, we can select credit contraction as the pivotal point of any recession. Obviously, not every recession started as a credit contraction, but ultimately, most of them got serious when credit was reduced. There are some good reasons for this, like the fact that economic agents are connected through a financial system that relies heavily on the credit market.

A simple example is the connection between the stock market and the credit market. It is common that at the end of a bull market, investors rely heavily on credit to invest (through margin accounts or other instruments).

The collateral for those transactions is the same stocks being bought with credit. This works very well when the stocks are rising, but when they come crumbling, investors need to put up more collateral that, usually, they don’t have. This incentivizes the lenders to reduce their loaning activities, which in time will depress consumption and investment. The circle will be completed when earnings exhibit a downtrend and the stock market reacts accordingly.

Trump believes the current growth rate is not enough. Therefore, he wants an infrastructure spending program and a fiscal stimulus.

The main problem with Trump’s wrong diagnosis lies on the fact that the Presidency might be pursuing the cure for the wrong disease, getting too much of an unnecessary medicine. In this case, it seems that the fiscal stimulus will be badly timed. The Trump Administration will use heavy artillery unnecessarily and it might run out of ammo when needed more.

The catch here is that an ill-timed stimulus will produce inflation. Most likely, the FED will react by increasing interest rates at a fast pace.

Another way to have sparking interest rates lie on the simple fact that after years of zero interest rate paradigm, FED’s officials might feel the urge to act to avoid unintended effects from the QE medicine. The response has been to increase interest rates at a steady pace. However, one should ask: Is the FED going too fast?

The recovery might still be considered feeble. The GDP growth rate has yet to reach the top speed of pre-crisis period. This means that going too fast on the interest rate front might bring an unintended recession.

The rally that followed the 2016 election was a surprise for most people. Analysts familiar with the political backstage weren’t taking seriously the possibility of Trump’s policy execution being fast-paced since most of the important measures needed the congress approval. However, the markets saw in deregulation and a loose budget a great opportunity for quick profits.

Trump has done no better than his predecessors on the speed of policy execution. And now the markets are worried about not only not having a quick buck, but also not having any sort of coherent government policy. If the trump rally had the power to send the stocks soaring, the Trump depression might have the strength to make the stock market tumbling significantly.

Since margin debt has been growing steadily since 2009 and it now stands near all time highs, a pronounced downturn could potentially set-off a wave of collateral reinforcements calls. The fact that many investors might be using too much leverage, means they might not be able to add extra collateral. In this case, credit markets might contract, shifting to a liquidity preference and losing confidence in the general markets like the S&P 500 (SPY) and the Nasdaq (QQQ). Soon, this will have reflexes in the real economy. 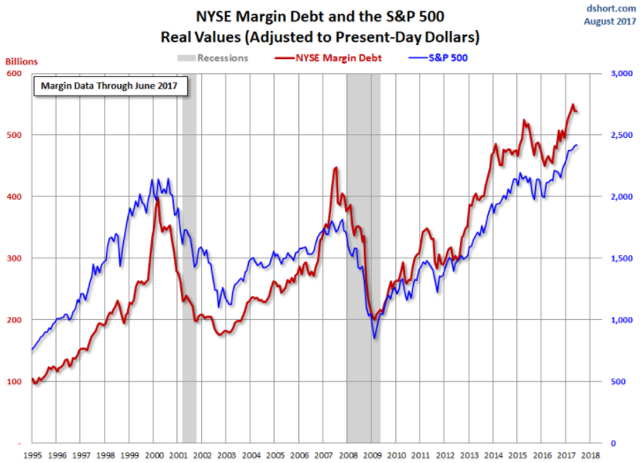 The expected path for Trump’s presidency should be to expand public expenses, to invest in infrastructures, while reducing income tax. This would create inflation and interest rates would naturally rise.

The higher interest rates could be poisonous for important parts of the US economy that are not overheated. This could affect the price of securities which in turn would affect the credit market, thus creating a recession.

Finally, Trump might set-off a market panic with the potential to vanish confidence from the credit markets, thus creating a recession.

These are the drivers of a recession that I envision as being most likely to lead to a recession and a bear market.

If I had to choose a recession from the past, I would say that the next one could be a mix between the 1937-38 recession and the dot-com bubble. Monetarists have argued that the 1938 was provoked by a rapid tightening. I feel that the same conditions are building-up in the present. On the other hand, stocks seem to be at a high level when compared with historical records.

Just a final hint gold (NYSEARCA:GLD) and gold miners, like Barrick Gold (NYSE:ABX), tend to do fine during recessions. 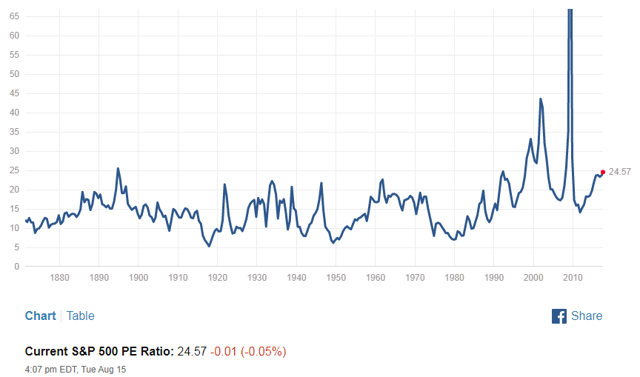 Disclosure: I am are long ABX.