Tech stocks will get overvalued on a frequent basis. Mainly, because this group is exciting to investors. Everyone hopes to nail the next Apple (NASDAQ:AAPL) or the next Microsoft (NASDAQ:MSFT). However, there are fundamental reasons why these stocks tend to beat the market.

The main reason for the excitement and outperformance is partially based on the constant pursuit of an edge. While traditional companies work on milking an existing edge, tech companies try to reach the next paradigm curve. Some of the high-profiled tech companies have been able to execute on their edge and were able to deliver financial results that most pundits would consider impossible a couple of years ago.

One example is Amazon (NASDAQ:AMZN). Not long ago, Amazon was heavily criticized for not having profits, now traditional retail stocks are suffering a market rout on the perception that traditional retail is doomed. From cloud servers to assortment algorithms, Amazon has built several edges.

Another perspective supporting tech stocks is the macroeconomic context of the past decade. The zero-interest rate period pushed investors to search for higher risk-return propositions. This being the case, one could only expect that interest rate hikes should reverse this process.

What place should tech stock have on a portfolio?

The truth is that tech stocks have been a key element to healthy portfolio returns. After the dotcom bubble, most tech stocks were dismissed as fads. Although there was a high mortality rate, many tech stocks survived and thrived. Looking at the top 10 stocks in 2000, at the height of the dotcom bubble, and looking at it now, we can see a very different picture in terms of the sectors represented. For instance, one of the hotshots of the 2000s, Amazon, made it to the top ten. 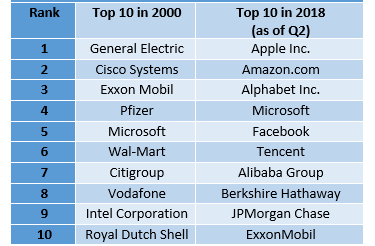 It seems clear that the virtue is in the middle. Buying each, and every fad from the 2000s was a mistake, but discarding the tech sector altogether wasn’t a better remedy. The top ten of the most valuable companies is now replete of tech companies.

However, as I’ve pointed out, interest rates usually work as gravity for stocks, and the paradigm on this front is clearly shifting.

One way to look at it is to see what happened the last time the Fed entered a tightening period. 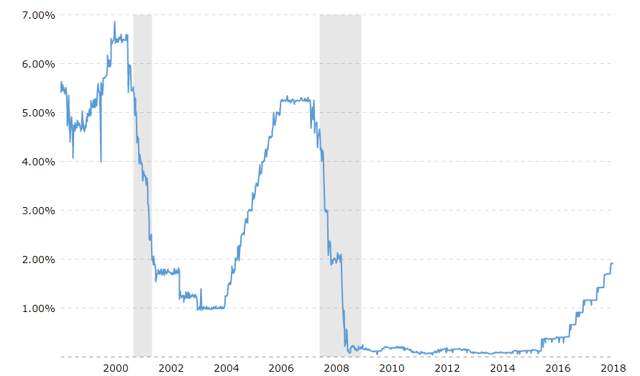 From 2003 until 2007, the Fed embarked on a tightening policy. During this time, the Nasdaq (NASDAQ:QQQ) overperformed the S&P 500 (NYSEARCA:SPY) during most of the time.

Although rising interest rates seem to increase the gravitational force on tech stocks, it seems that it is not an absolute inhibitor for overperformance relative to the broad market.

What to make from all this?

Let’s look at this in parts. During the first half of this year, the market woke up to the need to reprice the stock market. Obviously, a new context for interest rates demanded an asset price reappraisal by investors. However, after an initial correction, some of the tech titles are quietly returning to their previous highs.

There seem to be two main explanations. Companies with proven business models, like Amazon, Adobe (NASDAQ:ADBE), Red Hat (NYSE:RHT), enjoyed new highs. Coincidentally or not, these are also low-debt companies, meaning that the rise in interest rates won’t disproportionally inflate the financing costs. In many companies, the edge hasn’t dissipated because of higher interest rates.

I believe this to be the secret ingredient to keep investing in tech stocks: low debt. As rates increase, high-debt tech stocks will become increasingly sensitive to interest rates. However, low-debt companies with proven business models, i.e., positive cash flows and earnings generators, should be able to weather higher interest rates well.

Now, on the investment theory side, higher interest rates should mean lower valuations. Just looking to discounted cash flow formula, we can see that, all else equal, higher interest rates will lead to lower future discounted cash flows. However, tech stocks valuations have shown resilience under normal economic cycles. As we saw in the 2003 to 2007 period, tech stocks performed well.

The evidence gathered points against the more conventional idea that tech stocks will flounder in an interest rate rising environment. A more sensible argument could be made that rising interest rates will allow the survival of the fittest. Companies owning good business models, navigating the tailwinds of mega trends and with low debt might very well overperform even with higher interest rates.

Based on criteria like low debt, high growth and underlying tailwind trends, I’ve selected ideas that might deserve your further attention:

Adobe is one of the companies that better expresses the recipe of a proven business model and low debt. A couple of years ago, it was evident that Adobe already had a great business, providing software for content creators. However, the cloud has put that great business on steroids.

Video game developers have finally developed a business model around the internet, capable of monetizing their games. If you take a deep look, you’ll see that the profitability of the whole industry is structurally increasing, thanks to the internet. Take-Two (NASDAQ:TTWO) has many of the great franchises that players love. Rising profits and sales attest to that.

Facebook (NASDAQ:FB) has gone through one of the worst PR nightmares in the history of the social media sector. Accused of abusing user data, the company has even been blamed for the 2016 US elections outcome. After 18Q2 earnings release, many said that the data scandal is starting to take its toll. 20% sell-off? I see a 20% discount. Yes, the future profitability of the company should be double-checked, but I smell an overcrowded trade going bust on panic. And this spells opportunity.

Against all odds, open source has silently made itself indispensable to multi-billion dollar corporations. IT infrastructure needs it even more now that the cloud is booming and Red Hat (RHT) is seizing that opportunity. And shockingly, for those who watched the open source movement 2 decades ago, it is making money. Serious money.

The money keeps coming, as the 2Q18 earnings release showed (another earnings beat). The cloud should keep lifting Google’s (NASDAQ:GOOGL) (NASDAQ:GOOG) business, and who knows if one of the moonshots might surprise you in the next few years. However, the market is pricing Alphabet as if its growth is dissipating. It is true that Google growth has been incredible, and it will slow down, but the company is in a great position to benefit more from the cloud and AI. At the present levels, Alphabet might end up being a bargain.

Healthcare is a great sector to invest. Everyone needs it, sooner or later. The medical devices sector is a good way to get exposure to the sector. I prefer this space because there is much room for innovation and new products, which provides great drivers for price action. Due to several factors, like bad eating habits, heart problems are on the rise. Even with the current awareness, the trend should not invert anytime soon. Fortunately, for many people, Edwards Lifesciences (NYSE:EW) focuses solely in this area. Their aim is to tackle structural heart diseases, and for that purpose, they have, among others, noninvasive heart valve replacement procedures.

If healthcare is a growing sector, then ADN-related technology must be one of the hottest around. Genome sequencing promises incredible new products and services. From better diagnostics to tailored treatments, a huge number of possibilities will be available soon enough. Illumina (NASDAQ:ILMN) is already doing it, and doing it well.

The 3D printing mania that drove the market crazy back in 2014, propped up companies like 3D Systems (NYSE:DDD) and Stratasys (NASDAQ:SSYS). Proto Labs (NYSE:PRLB) never had the same glamour as 3D Systems. Maybe it is because the company sells itself as a manufacturer of custom parts for prototyping and not as a hot 3D printing company. Now that the dust has settled, the difference is striking.

If online retail is one of the growth sectors, then someone must deliver the products. And ZTO (NYSE:ZTO) is doing it with great margins.

At a time that the tech sector has reached 25% weight on the S&P 500 (SPY), portfolio managers ignoring tech might have a bad relative performance if those stocks keep rising. The names presented here, for further research, incorporate a good deal of growth in their current valuations. However, this time is not different, and things can always go astray. But there is a fundamental difference in all these stocks that separates them from the dotcom mania: all of them make profits, all of them have cash, and all of them have low debt. And this increases heavily the odds of survival in case of an apocalypse, or higher interest rates for that matter.