Last year, I wrote an article where I argued that to understand the chances of Tesla surviving the production hell, you had to look at previous Musk ventures. The idea revolved around the fact that Elon had, in the past, used a common play-book where he re-engineered processes and products in order to drive costs lower.

However, in this case, he went even further. For instance, capital expenses are getting dramatically reduced. The production tent was very mediatic, but, jokes aside, it proves the point. Tesla has become a lot smarter in the way it spends capex money. In the last earnings call, Elon Musk suggested that, for the Chinese factory, he expects CapEx to be less than 50% of what was needed for Model 3 production, in the US. And, the same for Model Y.

Now, the company is trying to calibrate its fixed and variable costs, as you can see by the overhead reductions all over the press. As a good engineer, Musk is always iterating in order to calibrate Tesla’s structure.

Elon Musk has followed the script. He went all-in on the production ramp for Tesla 3. He used his engineering skills to lead the company through that process and shown strong leadership by spending a lot of time on-site, sharing the employees’ pains.

However, some negative traits of Musk’s character have also surfaced. His outspoken personality and the unfiltered use of his Twitter account have led him into trouble. His $420 “funding secured” twit was a costly mistake. And, more recently, his production twits have awakened the SEC, that will likely pursue a case against Musk for violation of their previous agreement.

My story with this Tesla

I owned shares until the $420 twit. I exited the position two days later. I saw the whole “take Tesla private” as nonsense, a waste of time and energy that the company didn’t need. My problem then was that Musk never seemed very aligned with the rest of the shareholders. He might think that most of the investors with whom he deals won’t have problems in owning illiquid securities, but for most small investors, not having the choice to sell at any time is a no-deal.

Additionally, some events, like buying Solar City, have started to look like red flags, as time passes, and we see little to no progress besides some flashy events. The seemingly lay off of retail staff is another issue that I think will hit the company’s morale.

On the bright side, Tesla has revealed excellent engineering skills, and it was able to perform the ramp-up that so many considered impossible. However, one major negative has surfaced. Elon Musk’s actions while under pressure revealed that he is prone to some bad judgments.

Now, that the CEO has shown that he can be a barrel of gasoline ready to explode, Tesla stock has lost part of its price-action strength. All-in-all, it is hard to argue against the recent stock price performance.

The company’s balance sheet is not in its prime. During 2019, the company will have significant portions of its debt maturing. The company will have to roll it over or to repay it. The critical issue will be the demand for the company’s cars. Competitors are lining up new models to grab EV market-share, while at the same time Tesla’s retail staff is demoralized by the constant threats to its jobs.

These two factors taken together mean the company risks having an unexpected downturn in sales. That, in turn, might be an obstacle in the generation of cash-flow to repay the debt, leaving capital markets as the only source to avoid liquidity problems. However, the company has been avoiding that, apparently, because there isn’t much appetite in the market.

The pivotal point will be around deliveries and sales. If the data shows convincing signs that sales and deliveries are in danger of stalling, I think that there will be an existential threat to the company. On the other hand, if sales and deliveries hold, it is plausible to expect some margin improvements due to the progress in the manufacturing learning curve.

Using a couple of simple assumptions, we can perform a clarifying valuation exercise. Assuming the delivery of 320,000 Model 3 and 80,000 Model S/X, with ASPs of $50,000 and $90,000, respectively, we can calculate revenues around $23,200 million. If the company is capable of keeping the Energy and Services growth rate, revenues will come around $4,000 million. Assuming that the company will achieve 25% gross margin in the automotive division and 2.5% in the Energy & Services while keeping operating expenses growth below 10%, we have the following results: 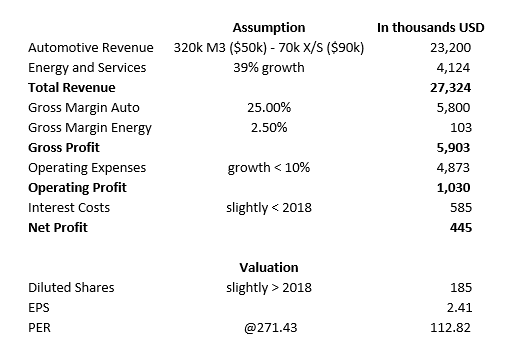 Bearing in mind that the assumptions seem very optimistic, I feel convinced that the risk/return proposition seems asymmetric on the downside.

Disclosure: I hold no positions in TSLA