To say that European banks’ performance has been disappointing, is an understatement. Since the European debt crisis started, the S&P 500 appreciated more than 100%, while Santander (SAN) and Deutsche Bank (DBK) lost more than 50%. The difference in relative performance is brutal.

The first intriguing sign, however, lies on the fact that US banks didn’t perform that bad. For instance, Wells Fargo (WFC) performed just slightly below the S&P 500. Based on this, we can conclude that the severe under-performance is not a systemic phenomenon common to the whole industry.

Therefore, the root cause must lie elsewhere. To dissect this, I’ll use two banks from the previous analysis: Santander and Wells Fargo. Both are conservative commercial banks that provide a good representation of the economies where they operate while at the same time they are in the opposite sides in terms of stock market performance.

Several analysts have pointed to a deterioration in the Brazilian economy and the recurrent woes about Spain as threats to healthy capital ratios and, therefore, the main cause for under-performance. Even Ana Botín has stated on Santander’s 2015 Annual Report:

“(…) our market valuation has fallen by 36%. This is probably related to a different perception of the strength of our capital and the extent of our regulatory capital buffers and to the concern about our presence in certain emerging markets.”

Though these causes are pertinent, I believe the root cause is more profound and may signal a long journey before we see a significant stock price appreciation beyond 2014 levels.

First of all, Santander’s operations are not that bad. Actually, the bank has not posted any quarterly loss since the Subprime crisis erupted. The profit has been growing moderately, although, the per share figures have been impacted by last year’s capital raise. 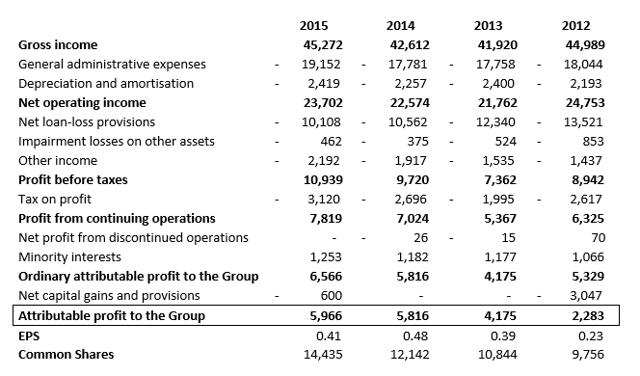 So the bottom-line per se is not the reason for the continuous down-slide in the share price. However, the Income Statement offers an interesting piece of information. The level of net loan-loss provisions clearly stands out and we should compare it against Wells Fargo.

The loan loss provisions are clearly affecting Santander’s performance. The difference between the two banks is huge. This is not a specific problem for Santander, other European banks have been struggling with the same issue. For instance, Unicredit S.p.A. had loan provisions around 34% of the Net Interest Income in 2015. Obviously, Santander and Unicredit are based on troubled countries like Spain and Italy which helps in getting such bad indicators, but even Rabobank in Netherlands (a perceived stable country in the eurozone) has a ratio around 11%. This more than doubles the results for Wells Fargo.

In my opinion, the reason is simple: unemployment. The European periphery has been struggling with high unemployment rates for some time now. This seemed to be a short term problem but it is much more resilient than European policymakers expected.

European economic paradigm is the root cause

The current European policy based on excessive market fundamentalism is perpetuating the banks problems. The adoption of austere budget orientated policies creates a recessive environment on the periphery, which ends up contributing to keep unemployment high. By involuntarily keeping unemployment high for a long time,  EU policymakers are destroying the assumptions built-in the credit models used to concede loans during the last decades. This means that in theory one could go to the extreme of saying that all the credit was conceded based on unrealistic assumptions. Since to be realistic one needed to consider an unemployment rate around 10%.

There has been a lot of backlash in the European media about the bank managers incompetence. Although, I believe there is a fair degree of truth in these accusations, I also believe that the current banking crisis in Europe cannot be seen as a specific problem of a given institution. It must be seen as a systemic problem arising from bad policies. I have extensively dissected the macroeconomic problems in Europe here.

All in all, one can only expect European banks to become an interesting investment after a credible set of policies to fight unemployment in Europe is rolled-out. The whole financial system is in a self-reinforcing cycle of failure and even the good banks are being drawn to problems. There are solid financial institutions in Europe but unless the root problems are eliminated, a good stock market performance for European banks seems unlikely.