Featured Image: Michael Mandiberg
Fixed income market hasn’t been attractive for investors during the zero interest rate period. The alternative was the stock market, but the end of QE3, in late 2014, brought fears about the sustainability of the valuations. In an old-fashioned self-fulfilling prophecy, investors fled and the stock market froze.

Where did the funds go?

The apparent huge returns attracted new types of investors. Mutual funds are one example of financial institutions that recently have turned to start-ups in order to improve returns.

Traditionally, Mutual funds invest in baskets of traded securities that are easily marked to market at any time. However, the fears concerning the stock market, made investors look for opportunities elsewhere and the venture capital camp seemed tempting. The fact that these securities are not traded might have also influenced mutual funds to get onboard. The misleading idea that the price of the latest VC round is the one that stands and a context of low scrutiny, might have been too tempting. This led to an increasing demand for start-up investment opportunities.

Graph 2 – Number of investments made by Mutual funds in late stage VC(Source: CBInsights) 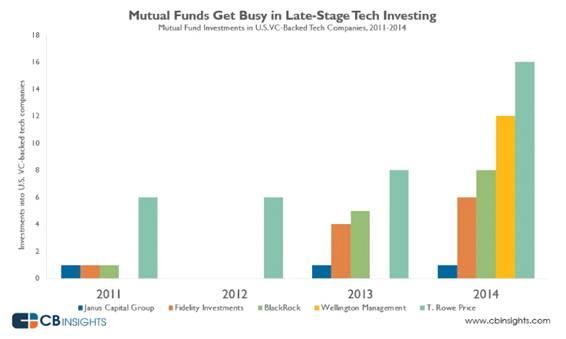 One of the most efficient features of financial markets is the ability to give investors what they want. Suddenly, everyone wants their own unicorn, so let’s give them. Even if it’s just a donkey with a horn (no offense meant for donkeys). In this scenario, the number of unicorns soared. 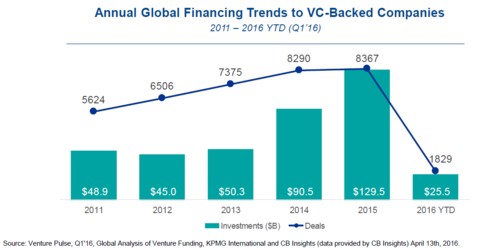 What we have here is a bubble

We all know how this ends, once newcomers start flocking into an investment opportunity, it spells trouble. That’s exactly what’s happening in the VC arena. After generous late stage investment rounds have provided skyrocketing valuations, the recipe for markdowns was complete. When that day came, Mutual Funds weren’t ready to deal with it.

Right now, we are at a testing point in a potential boom and bust process. We have passed the moment of truth, when the market recognized that there was a bias between the paper valuations and reality. One of the reasons, was a dry IPO market. The market is now coming to terms with reality.

However, there some very specific features to a VC bubble. The lack of liquid market transactions helped avoiding a typical market panic, thus partially supporting the value of the companies (at least on paper). On another note, the limits imposed to mutual funds investments in VCs discouraged the rapid reignite of a boom process through further investments.

Therefore, at this stage we can’t really say that we had a complete bust. As I see it, this was just a retreat that may be reignited a few months down the road. However, for the coming months, I believe the trend will be negative.

China and the emerging markets

To fully understand the dynamics of the whole thing and the impact it will have in asset allocation trends, we have to go backwards. The Chinese slowdown provoked anxiety on the US stock market.

Many US based companies saw China as their hottest growth market and they have passed the last decade investing a lot there. In the present context, it is reasonable to anticipate a drop in earnings per share.

On the other hand, the drop in the oil price scared investors away from emerging markets. This was especially truth for those countries more dependent on oil revenues. Therefore we had a capital flight from the periphery to the core of the capitalist financial system (US).

Part of that capital tried to avoid the traditional asset classes (fixed income and traded equities) and was channeled to the VC camp. The boom and partial bust of the VC market is creating a lack of supply of investment alternatives. Therefore, my belief is that, for the time being, most investors will park on safe havens.

We now have to account to another development that may cause more disturbance than we are ready to accept. The Brexit is a real possibility, which will mark the beginning of the disintegration of the European Union (NYSEARCA:EU).

The EUR and the GBP will be under pressure, but the market in general will face a lot of volatility in the coming weeks. In the long term, the consequences of a possible Brexit are incalculable. Investors know it and started flocking into gold, building a sustained trend as you can observe in the SPDR Gold Trust (NYSEARCA:GLD).

This is a simplified narrative of an historical event. Feasibility demanded that several twists and turns were excluded. Mainly, we have reflexive relations that end up self reinforcing the outcomes.

For instance, the higher level of capital supply increased the number of companies applying for investment rounds. But the fact that there were more companies competing for funds also influenced start ups to push marketing efforts to get capital, which might have attracted non-traditional VC funds (i.e. Mutual funds). As the first funds joined the party, others must have been struck by the fear of missing out and promptly joined.

The events are now unfolding and many dynamics are at play at the same time. Most likely, this means the reality will differ from the script I present here. However, a focused investor will use this script has reference and adapt his play as the events materialize.

How to play this mess going forward?

In the beginning of the year I predicted that the European mess coupled with the bloodbath in emerging markets was going to favor investing in the US. Although, I was right on the European and Emerging part of my rational, the truth is 6 months have gone by and the US dollar and the S&P 500 haven’t gone anywhere.

I believe one key is China. The Chinese drama is unfolding and we have reached the moment of truth. The market now fully recognizes that the Chinese economy is addicted to debt in order to keep its growth targets. Now, we have an increasing bias between the politics followed by the Chinese government and the reality. Without a policy revamp, China might be moving towards some sort of stagnation.

At this stage, investors are also wary of the US future. They fear a contagious reaction in the US and so far the prophecy is not disappointing. Investors have been trading on indicators and every time some figures disappoint, they flee.

I maintain my bullish stance on the US economy in the long term. However, in the short term, we might expect safe haven asset classes to perform better. In this environment, German Bunds (NYSEARCA:BUNL), Swiss Franc (NYSEARCA:FXF) and Gold are poised to perform better.

I’ve also started to research gold producers. Companies like Newmont Mining Corp. (NYSE:NEM), Barrick Gold Corporation (NYSE:ABX) and Goldcorp (NYSE:GG) may prove to be good investments in the current scenario. For UK based investors Fresnillo (OTCPK:FNLPF) may also deserve further research for those interested in a safe haven play.

One last point, if the gold trend keeps going up, it is possible that indebted gold producers may perform relatively better against peers, if the market perceives the rise in the gold price as an opportunity to eliminate some debt and stabilize the company.