At this point into 2016, the uncertainty is so huge that trying to outguess the market is revealing to be a nightmare. In this scenario, it only makes sense to assess what the market consensus is and work from there. Most likely, the market collective trend will have a saying in the outcome for the rest of the year.

I believe that the current market thesis supports a better than expected US economy. The job data has helped convincing the market that growth is just around the corner. With this in mind, interest rate hikes might be coming sooner than expected and during the last 12 months yields rose accordingly:

On the Brexit front, the market is starting to believe that the BoE has been pursuing the right path to cushion the Brexit impact.Therefore, the pound has performed better than expected. For instance, George Soros predicted the Pound would unravel to 1.10 –1.15, which didn’t happen (so far). Several analysts expected that the ongoing stimulus by BoE would cause the Pound to slip further,but the market seems to believe the future is bright for an independent UK. 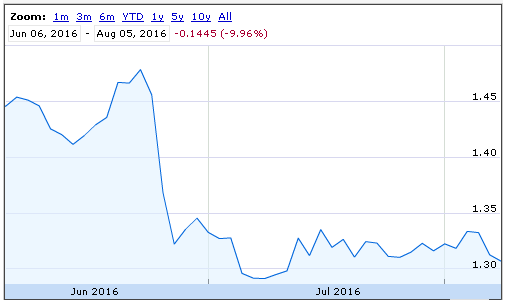 Finally, after a rocky start for the year, the Chinese stock market is stabilizing. This may help to improve the quality of credit collateral,which could boost the confidence of economic agents and act as a self–reinforcing trend.

All–in–all, this means the market isn’t expecting much more negative developments throughout the year. A possible rate hike is back on the table, heating the fixed–income market. The stock market is also benefiting from higher appetite for risk.

What to expect from the current scenario?

At this stage, I identify two main outcomes. On one hand, the current trend gains momentum and feeds on itself, thus supporting a market, otherwise, lacking conviction. On the other hand, we might have one or more developments breaking this slightly positive trend.

In my opinion, the current slightly positive bias has several weaknesses. I believe the key lies partially in China. The ability of the Chinese government to avoid a hard landing will be fundamental for the economic development of the rest of the world. US companies invested a lot in the Chinese market during the last decade. Their earnings are now significantly dependent on the Chinese consumption level. A hard–landing in China could mean receding earnings for US companies. The same goes for the commodity markets.

Then we have the Brexit. The pound is behaving fine, given the circumstances. However, we haven’t seen enough data to correctly evaluate the Brexit impact in the British economy so far. The housing market will be a determining factor and I believe investors have been too optimistic regarding UK’s property market.

Finally, the US elections will be a wild card. I believe financial markets will react badly if Donald Trump wins the race for President of the United States.

However, financial markets can influence events and, as I said, I identify a positive bias in the market. One should not underestimate the market’s ability to turn expectations upside down.

So how to play this mess?

My preference to play this scenario is… following the crowd. Right now, the market is testing the positive trend. It is almost impossible to anticipate what scenario, if any (at all), is going to prevail. What we can do is follow the markets and adapt our scenarios accordingly.

For instance, a reinforcement of the Chinese stock market should be seen as a positive development in terms of Chinese consumption and, therefore, positive for US companies’ earnings (and commodities).

UK’s housing and property market will soon reveal the damage done to the economy. The pound will react accordingly. A positive reading on the housing data will, most likely, be positive for US stocks.

Donald Trump losing the Presidency race, won’t add much, but winning the race will hurt the stock market. However, Gold (GLD) is poised to perform well in a Trump victory.

Gold is poised to work well in the case of an adverse scenario taking hold. Specifically, US based gold miners like Barrick Gold (ABX) and Newmont Mining Corp. (NEM) should do the trick.

In case China and emerging markets perform well, companies with significant earnings exposure to these markets will benefit from it.Companies like Nike (NKE), Coach (COH), Intuitive Surgical (ISRG),Disney (DIS), Facebook (FB) and Alphabet (GOOG) are now among my choices in a positive scenario.

Later, as events unfold, I’ll try to provide better insight into the companies I’ve just mentioned and add some more, if possible.